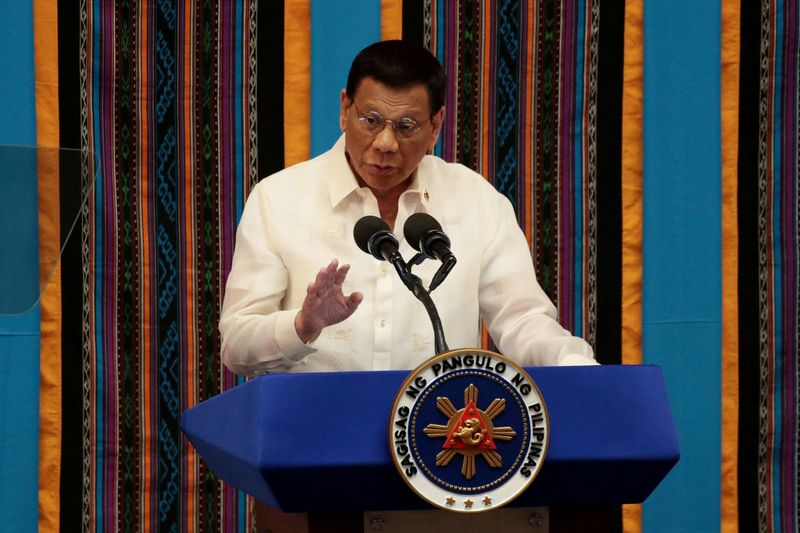 MANILA (Reuters) – Philippine President Rodrigo Duterte’s approval rating has hit a record high, an opinion poll showed on Monday, despite a stubborn coronavirus crisis that has ravaged the economy and caused millions of job losses.

The Pulse Asia survey, conducted last month with in-person interviews with 1,200 adult Filipinos, found 91% of respondents approved of both his performance and his personality, up from 87% and 83% respectively in December.

The Philippines, for years among the world’s fastest-growing economies, is forecast to see a 6.9% economic contraction this year, the World Bank has said, the biggest since the 1980s and worse than the government’s projected 5.5% decline.

Ronnie Holmes, president of Pulse Asia, said during a television interview that the overwhelming thumbs-up for Duterte showed the public blamed the decline on the impact of COVID-19 rather than government mishandling.

The survey was conducted in and around the capital Manila, where tight restrictions have been partly loosened to try to revive business activities.

The Philippines leads Southeast Asia with the most number of cases https://tmsnrt.rs/3ngW4uH at 322,497 and is second to Indonesia in deaths.

The firebrand leader has promised free vaccines, prioritising first the poor and then the middle class, police and military personnel.

Duterte, 75, is allowed only a single term as president but the chance of his allies succeeding him will be bolstered significantly if his popularity remains intact ahead of the 2022 presidential election.

While his opponents chide him for his authoritarian style and low tolerance of dissent, Duterte remains hugely popular because of his man-of-the-people style and a perception of strong leadership and success in fighting crime and corruption.