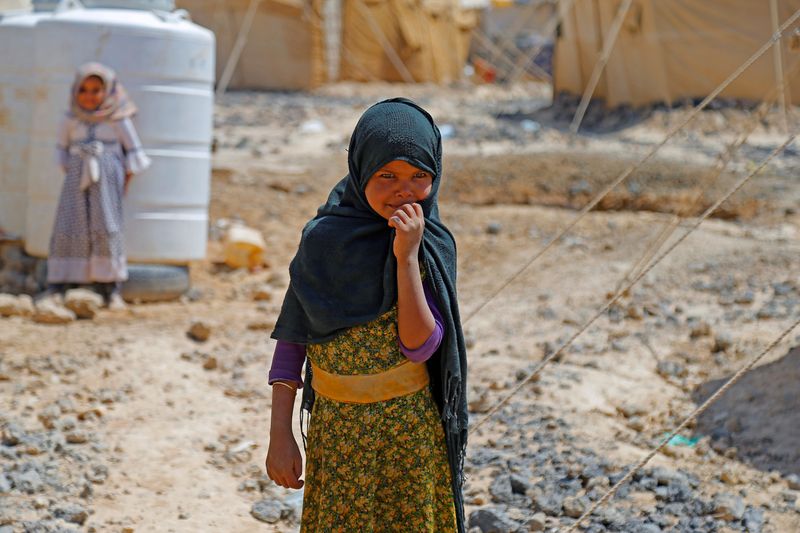 MARIB, Yemen (Reuters) – In Yemen’s gas-rich region of Marib, fighters loyal to the Saudi-backed government recited Koranic verses before launching a hail of mortar and machine gun fire towards rocky mountains, in a desperate bid to push back Houthi forces.

The commanding officer peered through his binoculars at the dust and plumes of black smoke thrown up by the firing, aimed at a group of elusive enemy Houthi snipers.

A few dozen kilometres (miles) away, hundreds of displaced civilians in makeshift camps waited for water, food and medicine from humanitarian groups – a further sign that despite United Nations peace efforts, the near six-year-old war grinds on.

“We have more than 1,500 families in this camp and they already moved three times … because the fighting keeps following them,” said Mohsen Mushalla, director of al-Sowaida camp some 15 km from Marib city.

“They don’t have water, electricity, a hospital and the nearest town is 10 km away. Just bringing water is enough hardship,” Mushalla added.

Fighting has raged for months in Marib, the last stronghold of the internationally recognised government.

It was ousted from power in the capital, Sanaa, in late 2014 by the Iran-aligned Houthi movement, prompting a Saudi-led coalition to intervene.

The war, which has caused the world’s worst humanitarian crisis, has been in stalemate for years. The government of President Abd-Rabbu Mansour Hadi has also fought separatists in the south who seek independence.

Some diplomats and experts say that a Houthi victory in Marib, which would hand the group complete control of the northern half of Yemen, could have “ripple effects” on the conflict across Yemen and scupper U.N. efforts to secure a nationwide ceasefire.

Houthi forces have opened three frontlines in Marib region, advancing in recent months from the northern district of Madghal, the southern town of Rahabah and from the west in Sarwah.

The group has seized six districts and large parts of Sarwah, which lies 80 km from Marib city – the last line of defence before Yemen’s biggest gas and oil fields. But progress has slowed and victory is not guaranteed.

“Marib is a military operation for both sides but it is a pressure tool for the Houthis on the negotiating table,” said a diplomat involved in the talks.

“Luckily, the fighting has slowed down over the last two weeks, thanks to the Houthi-Saudi indirect talks and because the battle has been exhausting for both sides.”

The Saudi-led coalition and Houthi officials did not immediately respond to requests for comment on the status of fighting in Marib or the broader conflict.

The violence has escalated since U.N. Special Envoy to Yemen Martin Griffiths pressed both parties to agree on a ceasefire deal that would pave the way for broader negotiations to end the war that has killed more than 100,000 people.

Earlier this month, Griffiths told the 15-member U.N. Security Council that he sent an advanced draft of the agreement to the parties, and warned the international community not to underestimate the political importance of Marib.

The fighting in Marib has displaced nearly a million people, the U.N. said, and threatens around 750,000 refugees who have settled in the city since the war started in 2014.

“We know that any intensification of the conflict will put them (displaced civilians) at extreme risk and we’re very worried that many of the people who live in Marib city will themselves become displaced by the conflict,” Lise Grande, U.N. Humanitarian Coordinator for Yemen, told Reuters.

“I fled the fighting in Aden, this city hosts refugees from all over Yemen … we call on the international community to stop missile strikes on the city as only refugees and children suffer from them,” said Nermeen al-Hashidi, a Marib resident.

In al-Sowaida camp, tents are set amid the towering hills of the desert, and children walk barefoot while others drink water directly from big white cisterns left in the fierce heat.

“I have a wife and five children living inside this tent,” said Mohamad Abdullah Qassim, a refugee.

“The international organisations have provided us with it, but I’m not sure that they are very helpful. Other tents burned in a big fire next to us.”