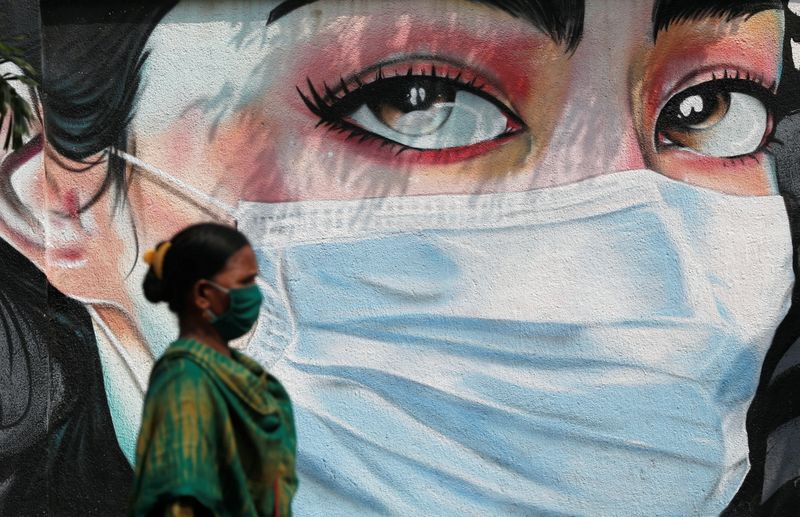 A woman walks past a graffiti of a girl wearing a protective mask amidst the spread of the coronavirus disease (COVID-19) in Mumbai, India, October 23, 2020. REUTERS/Francis Mascarenhas

(Reuters) – Asia surpassed 10 million infections of the new coronavirus on Saturday, the second-heaviest regional toll in the world, according to a Reuters tally, as cases continue to mount in India despite a slowdown and sharp declines elsewhere.

The Reuters tally is based on official reporting by countries. The true numbers of cases and deaths are likely much higher, experts say, given deficiencies in testing and potential underreporting in many countries.

Despite the Asian spikes, the region overall has reported improvement in handling the pandemic in recent weeks, with daily caseloads slowing in places like India – a sharp contrast to the COVID-19 resurgence seen in Europe and North America.

Within the region, South Asia led by India is the worst affected, with nearly 21% of the reported global coronavirus cases and 12% of deaths. This contrasts with countries like China and New Zealand that have crushed infections and Japan, where COVID-19 had been stubbornly entrenched but not accelerating.

India is the worst-hit country in the world after the United States, although infections are slowing in the world’s second-most populous country. India is reporting more than 57,000 cases of the virus a day, viewed on a weekly average, with 58 new cases per 10,000 people in Asia’s third-largest economy, according to a Reuters analysis.

India is averaging 764 COVID-19 deaths a day, the worst in the world and accounting for one in every 13 global pandemic deaths.

The country has reported nearly 7.8 million infections, behind the U.S. tally of 8.5 million, and nearly 118,000 deaths, versus 224,128 in the United States. Unlike the recent U.S. surge, however, India’s slowdown saw the lowest daily caseload in nearly three months on Wednesday.

India’s eastern neighbour Bangladesh is Asia’s second-worst hit country, with nearly 400,000 cases. But daily infections have slowed to 1,453, less than 40% of the July peak.

Although the pandemic is slowing in Bangladesh, the world’s biggest apparel producer after China faces harsh recession as a second wave of COVID-19 hits key markets in Europe and the United States.

Even if the country is making progress on controlling the disease, leaders of the key garment sector say international retailers are delaying orders or demanding steep price cuts, forcing them to lay off their workers. Some 1 million workers were furloughed or laid off. About one-third of those have been rehired since July, according to union leaders.

In Southeast Asia, Indonesia surpassed the Philippines last week as the worst-hit nation with more than 370,000 infections.

The world’s largest Muslim-majority nation, Indonesia has struggled to get its outbreak under control. With the country due to host soccer’s under-20 World Cup next year, the government is racing to secure a supply of vaccines still under development, which some epidemiologists say means seeking a “silver bullet” solution before full vaccine efficacy and safety is known.

The Philippines, which last week reported its biggest daily tally in a month, has put partial coronavirus restrictions around the capital Manila until Oct. 31 to check COVID-19..

Despite Asia’s patchy record, a World Health Organization expert said on Monday that Europe and North America should follow the example of Asian states in persevering with anti-COVID measures and quarantine restrictions for infected people.

Mike Ryan, head of the UN agency’s emergencies programme, said the global death toll from COVID-19 could double to 2 million before a successful vaccine is widely used and could be even higher without concerted action to curb the pandemic.

(Reporting by Anurag Maan in Bengaluru; Editing by William Mallard)