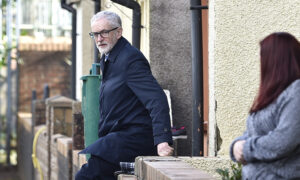 The former leader of the British Labour Party, Jeremy Corbyn, has just been suspended from the political party he led to electoral defeat against Boris Johnson. He was suspended not for anti-Semitism precisely, but for denying that anti-Semitism was a serious problem within the party, despite an official report finding that it was.

Whether Mr. Corbyn is personally an anti-Semite is a moot question, and probably irrelevant. There are reasons to suspect that he is, but they don’t amount to indisputable proof. Since only he knows what is in his heart, let us leave the question aside.

What is more important is the question as to why a left-wing party, which until quite recently prided itself on its opposition to all forms of racial prejudice, should, within a few years, have developed a marked, and unprecedented, tendency towards antisemitism.

I do not think that electoral politics explains it entirely, or even to a very large extent. It is true that the Muslim vote is now ten times larger in Britain than the Jewish vote, and that it is likely that anti-Semitism would play well with the Muslims.

But in practice, the Muslim vote is Labour’s anyway; only the best-educated and economically-successful Muslims would vote for the Conservatives, antisemitism or no.

I think the problem goes deeper, in fact to the very nature of socialist thought in an open society. It is often said that antisemitism is the socialism of fools, but I think it might be said, with equal or greater justice, that socialism is the antisemitism of the educated, particularly the lumpen-educated.

And as the Labour Party, under the leadership of Jeremy Corbyn, became considerably more socialist than under its previous leadership, it was therefore not surprising that antisemitism emerged as a force within it.

Generally-speaking, antisemitism has been thought of as a right-wing or conservative phenomenon, but this is a half-truth at best.

There is no doubt that nationalist and identitarian politicians have scapegoated Jews, often to an obsessive degree, in their search for votes and power; but in the late nineteenth and twentieth centuries their hatred of Jews has fed on the perception that Jews succeeded to a quite remarkable degree in Europe once they were emancipated (an emancipation in which, incidentally, Napoleon played a great part).

In Germany, for example, the anti-Semites drew attention to the fact—and it was a fact—that Jews were disproportionately successful in such fields as academe, big business, banking, the arts, medicine, the law, newspapers, and (a particular bête noire, for some reason) department stores.

And the easiest explanation for this phenomenon—for everyone likes to blame someone, as well as have someone to look down on and hate—was a kind of conspiracy, a conspiracy of the successful to dominate and reduce everyone else to servitude, gathering all social, economic and cultural power into their hands to the detriment of everyone else. For without such a conspiracy, how could a social group have become so successful?

Now the whole point of socialism in a relatively (though no doubt imperfectly) open society such as Britain, and many others, is that its whole economic system is fundamentally unjust.

Socialists such as Mr. Corbyn are fond of talking about a complete and radical change in the fabric of the economy of the country in favour of justice, always confounding equity with equality. The more socialist they are, the more unjust they see the present dispensation as being.

The Jews in practically all Western countries are highly successful. They are, of course, not the only disproportionately successful group: so are the Quakers, and increasingly the Sikhs, the Hindus, the Chinese, the Koreans, and others.

Moreover, they succeed despite prejudice against them, and sometimes even persecution: therefore, provided prejudice is neither enshrined in law, as it was in South Africa, or so great as to be virtually universal, mere prejudice, however unpleasant it may be to experience it (and I do not at all underestimate this), is not the explanation of the relative failure of other groups.

But these rather obvious considerations are of no use to political entrepreneurs: that is to say, those who seek their fortune in crude demagoguery.  For them it is far more useful to conceive of difference in outcomes between groups as, ipso facto, evidence of injustice, to be corrected by political means—happily, under their own direction.

Thus it is that the Chinese in Malaya and Indonesia, the Lebanese in West Africa, the Indians in East Africa, the Jews in Europe, come to have been or to be the targets of resentment, no doubt partly spontaneous but also assiduously cultivated, all in the name of supposed economic justice. If there were economic justice, equality between groups would be assured.

So it makes sense for socialists in a country like Britain to be antisemitic. It will no doubt be the turn of other groups in due course, though because of European traditions Jews are likely to remain the favourite among scapegoats for some time.

It is well to remember that for much of the nineteenth century in France, antisemitism was a left-wing, socialist movement. It was the socialists Alphonse Toussenel and Auguste Chirac who wrote two volume works such as “Le Juifs, rois de l’époque: Histoire de la féodalité financière” (“The Jews, Kings of the Age: The Story of Financial Feudalism”) and “Les Rois de la République: Histoires des Juiveries” (“The Kings of the Republic: Stories of Jewery”), 1845 and 1883 respectively. Édouard Drumont’s infamous “La France Juive” (“Jewish France”) was profoundly influenced by this line of thought.

The parallels between this way of thinking about the world and that of the American fascist movement, Black Lives Matter, is obvious. This is not to say that all is for the best in this the best of all possible world, that there are no injustices, inequities, and so forth. But fascism was never the answer to them.

Theodore Dalrymple is a retired doctor. He is contributing editor of the City Journal of New York and the author of 30 books, including “Life at the Bottom.” His latest book is “Embargo and Other Stories.”

Views expressed in this article are the opinions of the author and do not necessarily reflect the views of The Epoch Times.