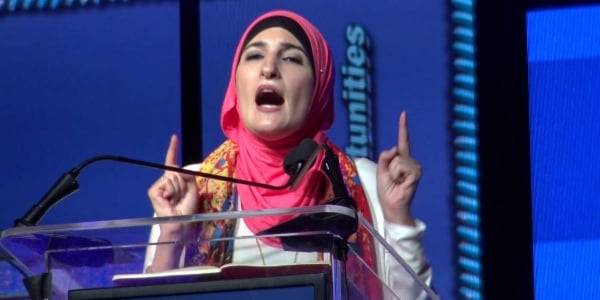 No where is the left’s hypocrisy more obvious then when it comes to their condemnation of “racism” and “bigotry.”

While many on the far-left (which has seemingly overtaken the mainstream Democratic party) are quick to claim Republicans are racist for not agreeing with the efficacy of equity policies, those same leftists often overlook bigotry that can be found within their own ranks.

The argument can be easily made that the most pervasive form of bigotry within the American left today is antisemitism and the left’s current figurehead, Joe Biden, has touted the endorsements he has received from many of the group’s most egregious anti-Semites.

In a July message, Joe Biden thanked the members and supports of Emgage for their endorsement.

Emgage is an anti-Israel Muslim PAC, largely funded by George Soros, that has been ensconced in controversy over the past several years for defending terrorist groups and collaborating with Muslim Brotherhood-affiliated organizations.

As an official co-host of the Islamic Society of North America’s (ISNA) conferences, Emgage associated itself with various anti-Semitic and Islamist extremists.

At ISNA’s 2018 conference, various terror apologists, homophobes and individuals calling for the eradication of the state of Israel were in attendance.

Terror apologists in attendance included: Linda Sarsour, the Women’s March co-founder who in 2014 called for a violent “intifada” in America and during 2018’s ISNA conference warned against “humanizing” Israelis; Hatem Bazian, the leader of American Muslims for Palestine, a group which has defended terrorists in court; and Zahra Billoo, who defended  the terroristic Hamas as “freedom fighters.”

Sarsour has also advocated for the destruction of Israel, with Sarsour once claiming the state “is built on the idea that Jews are supreme to everyone else,” according to the Washington Examiner.

Biden’s embrace of a group so closely associated with anti-Semitic bigotry is not the only point of blatant hypocrisy in this instance.

In his approval of Engage, the allegedly pro-LGBT candidate is also approving of an organization that has used 2018’s ISNA conference to platform various individuals with an extremely radical anti-gay position.

As ISNA’s official co-host, Emagage also featured a number of extremists including Muzammil Siddiqi, who once supported laws in countries where homosexuality is punishable by death and Omar Suleiman, an imam who described homosexuality as a “disease” which would “destroy your children.”

Biden’s thanks to Emgage isn’t his only seemingly tacit approval of anti-Semitic endorsers.

In all fairness, the Biden campaign has distanced itself from one of the most notorious anti-semites associated with Emgage, Linda Sarsour, in the past, with one campaign spokesperson condemning “her views” as well as the anti-Israel Boycott, Divestment, Sanctions (BDS) movement.

However, the former vice-president’s campaign has failed to take such action with respect to the vast majority of additional anti-Semitic and homophobic individuals associated with Emgage.

If you’re going to preach to the American people about equality and falsely claim that Donald Trump has failed to condemn white supremacists, it’s probably not the best look to get in bed with so many people who hate Jews and homosexuals.

Then again, it could also be argued that the anti-Semitic coalition amidst the left’s ranks is an important segment of Biden’s base.

Best not offend them.

This article appeared originally on The Western Journal.