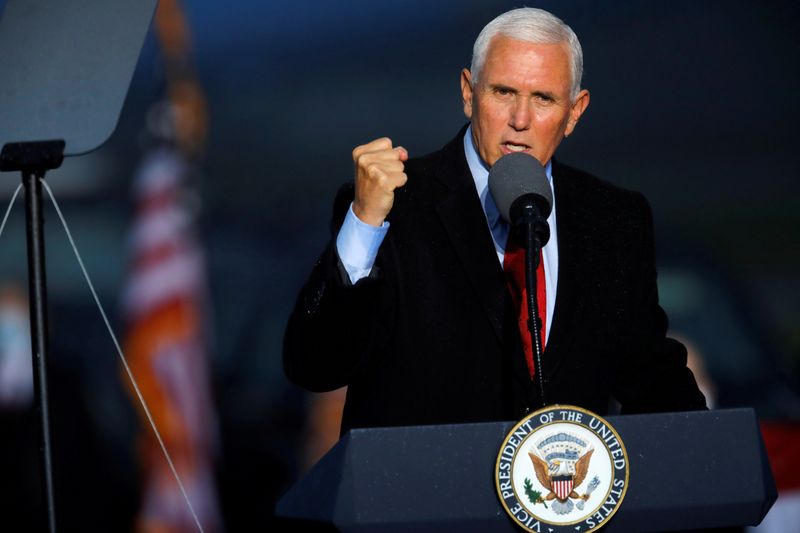 By Jeff Mason and Sonya Hepinstall

WASHINGTON (Reuters) – Vice President Mike Pence, a Christian conservative and one of the few constants in Donald Trump’s tumultuous White House, has kept his boss’s confidence by being careful never to step out of the president’s shadow.

Whether Trump wins or loses the election on Tuesday, that strategy and status are likely to change. Pence, 61, will be catapulted into a group of front-runners for the 2024 Republican presidential nomination as soon as the 2020 results are known.

He will do so with the record of a No. 2 who was content to play a largely behind-the-scenes White House role, eschewing Trump’s propensity for drama and endearing himself to the former reality-television-star-turned-commander-in-chief.

A former governor and U.S. congressman, Pence has been central to some of the Trump administration’s main legislative victories, including tax cuts passed in 2017.

He also oversaw the U.S. response to the coronavirus pandemic as head of the White House Coronavirus Task Force, but that brief – despite being hailed as a success by the administration – has not gone well.

About 230,000 people have died from COVID-19 in the United States, the highest death toll for a single country in the world, and the administration has been widely criticized for undermining health experts’ calls for widespread use of masks and social distancing.

Pence has been a key defender of Trump throughout the tumult of the pandemic and often battling factions in the White House, maintaining his own influence by developing a close relationship with the former New York businessman.

Pence’s chief of staff, Marc Short, who came down with the coronavirus himself, said Pence speaks to Trump multiple times a day from morning to night.

Reducing taxes and regulation, advancing anti-abortion policies, and transforming the judiciary with conservative judges and Supreme Court justices are among the policy changes of which Pence is most proud.

As for the pandemic: “I think that he looked at what people had forecast was possible, lives saved, building up of PPE … development of a vaccine and thinks it’s a pretty significant accomplishment,” Short said.

But during their Oct. 7 vice presidential debate, Pence’s Democratic rival Kamala Harris assailed the administration’s record on the virus, saying: “The American people have witnessed what is the greatest failure of any presidential administration in the history of our country.”

Pence is always careful to praise Trump and hew to his positions, even in closed-door meetings when the president is absent. He often says the job is “the greatest privilege of my life.”

If Pence runs for president in 2024, he could face other Trump acolytes such as Secretary of State Mike Pompeo and former U.S. Ambassador to the United Nations Nikki Haley in the race for the Republican nomination.

What he will not be able to do, and perhaps not want to do, is separate himself from Trump’s agenda.

His style, however, is much different from that of his boss. He is calm rather than volcanic, and deeply religious.

“I’m a Christian, a conservative, and a Republican, in that order,” Pence has said.

Pence has been married to his former schoolteacher wife Karen since 1985. They are both born-again evangelical Christians and have three adult children.

The Indiana native is a darling of conservative Republicans for his opposition to abortion rights and passionate support for deregulation of business. He has been pivotal to securing Trump support among those voters.

Pence long advocated for Jerusalem to be recognized as Israel’s capital, which Trump announced over the objections of Arab nations and many Western allies, in another win for evangelicals.

Pence was instrumental in placing several abortion opponents in key positions at the Department of Health and Human Services, which has made several decisions advancing conservative social policies, including broadening exemptions for employers who cite religious or moral reasons for refusing to cover birth control, a rule that upheld by the Supreme Court in July.

He also led the charge for reinstating a policy that requires foreign non-governmental organizations that receive U.S. funding to vow not to discuss or perform abortions.

He is often to the right of mainstream America on social issues such as gay rights. In 2015, as Indiana governor, he was forced to revise a state “religious liberty” law he had signed that opponents said allowed discrimination against gay people.