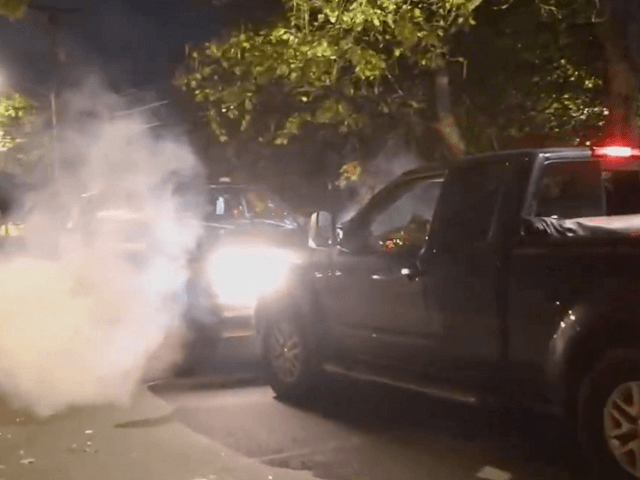 Antifa protesters attacked an SUV in a residential area of Vancouver, Washington, during a protest late Friday. The driver used pepper spray as he escaped the rock-throwing crowd. Later, a pickup truck reportedly driven by Antifa blocked the path of the SUV. During the SUV’s escape, a passenger appears to fire two shots into the air before fleeing.

“Shoot them,” an Antifa protester screams after the two vehicles collided. “Shoot those mother-f*ckers.”

A video shows the faceoff between the SUV and the truck. The SUV driver spins his tires as he attempts to push the Antifa truck back. He then backs away.

10.30 Trucks ram each other & shots fired in downtown Vancouver, WA during a protest for Kevin Peterson. Shots fired by far-right extremists who maced the crowd of protestors moments earlier. #blacklivesmatter #VancouverWA #gunshots pic.twitter.com/dILu6ljviC

As he turns around, the passenger rolls down his window and appears to fire two warning shots into the air. “I got your license plate,” someone yells as he drives away.

This incident occurred after another confrontation between this driver and the Antifa protesters. During the initial attack, the driver appears to fire pepper spray at people around his SUV.

As he pulls away, protesters begin throwing rocks at the vehicle. The sound of multiple rocks striking the SUV can be heard in the video.

They just fucked this car up #Vancouver pic.twitter.com/zMHoG9lGwW

In a separate incident, Antifa stole a U.S. flag from the back of a pickup truck. The protesters then set the flag on fire in the streets, Breitbart News reported.

Bob Price serves as associate editor and senior news contributor for the Breitbart Texas-Border team. He is an original member of the Breitbart Texas team. Price is a regular panelist on Fox 26 Houston’s What’s Your Point? Sunday-morning talk show. Follow him on Twitter @BobPriceBBTX and Facebook.