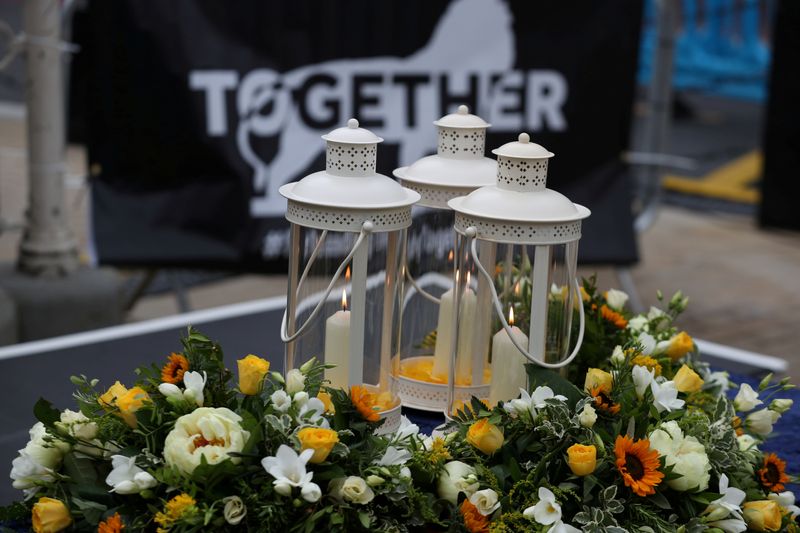 FILE PHOTO: Flowers and candles are seen during a vigil in memory of David Wails, Joseph Ritchie-Bennett and James Furlong, the victims of a stabbing attack, in Reading, Britain, June 27, 2020. Steve Parsons/Pool via REUTERS/File Photo

LONDON (Reuters) – A man has admitted killing three people during a stabbing spree in the southern English town of Reading in June, the BBC reported on Wednesday, an attack police declared a terrorism incident.

Khairi Saadallah, 26, was accused of murdering the men and stabbing three others with a five-inch knife during the attack in a park in the town on the evening of June 20.

The BBC said Saadallah, who a security source told Reuters at the time of the incident was a Libyan national, had admitted murder and attempted murder at a hearing at London’s Old Bailey Central Criminal Court.

However, while the prosecution said the attack was a pre-meditated terrorism attack, his defence team did not accept that and said his mental health needed to be taken into account, the BBC reported.

Another of the group required 28 stitches to a head wound. Two other men who were sitting with friends nearby were also stabbed, one in the back while the other suffered a cut to his cheek.

An off-duty police officer who was at the scene followed the attacker from the park and he was arrested nearby.

Earlier this month, the terrorism threat level in Britain was raised to “severe”, meaning an attack is seen as highly likely, after recent incidents in France and Austria, although the government said there was no specific threat.