Education minister Arie Slob says “it is ‘completely unacceptable’ that teachers are put under pressure because they teach about the value of freedom of speech.”

Slob can, however, expect a great deal more of this pressure, thanks to the Netherlands’ acceptance of mass Muslim migration. It is inevitable that among the peaceful Muslims who enter the country, there will be some Muslims who believe that the Sharia provision that blasphemers must be put to death should be implemented in their new home. 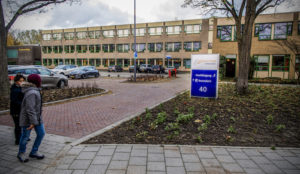 “Rotterdam teacher in hiding after online threats in dispute over ‘blasphemous’ cartoon,” DutchNews.nl, November 5, 2020 (thanks to S.):

ANP Police in Rotterdam are investigating online threats made against a teacher who had hung a cartoon commenting on the attack on French satirical magazine Charlie Hebdo in January 2015 on his classroom notice board.

According to the NRC, the drawing had hung on a classroom notice board for some five years but it was not until the school – which has Catholic roots – held a memorial for murdered French teacher Samuel Paty, that it became a contentious issue.

Sources at the Emmauscollege told the paper that the situation in the school had soured after some teachers started discussions about the cartoon of Mohammed which had led a radical Muslim to murder Paty last month.

Then, the paper said, a group of girls demanded the teacher remove the picture from the notice board because, they said, it was blasphemy.

Despite the teacher’s explanation – that the cartoon was not of Mohammed but of a terrorist – the dispute continued on social media.

Police told the NRC that direct threats were made against the teacher, and that they were taking them very seriously….

The NRC says that more teachers at the school, which focuses on pre college and pre university streams, no longer feel safe and, according to its sources, the teacher in question has gone into hiding.

MPs and ministers on Thursday were united in their outrage, with education minister Arie Slob saying it is ‘completely unacceptable’ that teachers are put under pressure because they teach about the value of freedom of speech. The intimidation of teachers will not be tolerated in any way whatsover, Slob said. ‘We will take tough action against it.’

Meanwhile, over 100,000 people have signed a petition set up by imam Ismail Abou Soumayyah, which calls for insulting Mohammed to be made a criminal offence….